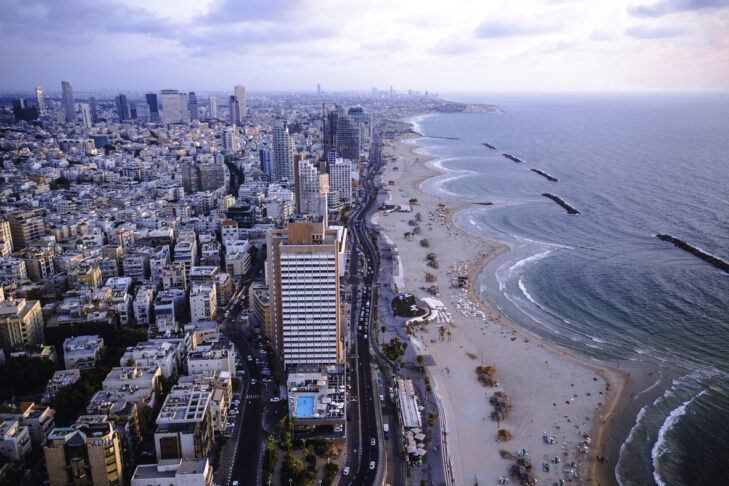 Mark your calendar and book some tickets: Delta Air Lines launches nonstop service to Tel Aviv on May 26, part of a larger initiative to expand its Boston presence. Flights will run three times per week, landing at Ben Gurion Airport, making it even easier for New Englanders to visit Israel.

These nonstop routes are in addition to newly reinstated Boston to Tel Aviv flights on El Al, Israel’s official airline carrier, which offers two flights per week. Those routes first launched in 2015 but had been put on hold during the pandemic. (New York and Miami are the only other cities in the U.S. with two carriers flying nonstop to Israel.)

David Goodtree, founding board member of MassChallenge Israel and former Boston chair of AIPAC, was instrumental in bringing the Delta route to Boston. Goodtree has organized business community delegations to Israel with both former Gov. Deval Patrick and Gov. Charlie Baker. (And, of course, he plans to return soon via Delta with his whole family.)

He says the new Delta and El Al flights will help to support longtime pillars of the Boston-Israel connection, from community building to business to family travel.

“Nobody goes to Israel for just one reason. You go for business, or to study, or with family, or to volunteer. Every trip is multi-variate,” he says. Plus, he notes that approximately 25,000 Israelis live in Boston.

In terms of community, Boston is home to 30-plus Israel-oriented nonprofits. We have an “extraordinary breadth of communal engagements” with Israel, Goodtree says, such as the Boston-Haifa Connection, supporting at-risk families in Haifa, and the 2022 Israel Ride, an annual cycling eco-fundraiser supporting the Arava Institute for Environmental Studies and Hazon: The Jewish Lab for Sustainability.

He’s hopeful that the Delta and El Al routes will further strengthen Boston’s various business ties to Israel, too; according to the Massachusetts-Israel Economic Impact Study, Israeli-founded businesses represent about 4% of the gross domestic product in Massachusetts.

“An extraordinary number of Israeli-founded businesses have established their U.S. presence and headquarters in Boston: CyberArk, Transmit Security and even companies like Dell and IBM have acquired Israeli companies. There’s so much innovation from Israel,” he says. There’s also logistical appeal: Boston is a getaway to the rest of North America, easily accessible from Tel Aviv, without a major time zone difference.

Then there are the students sure to pack the planes, from local day schools to universities: “[There are] Israeli students who study at Harvard in the Wexner program and MIT Sloan. There are exchange programs from the universities and Birthright. That’s a whole other category: academics,” he says.

Other airlines had originally planned to focus primarily on restoring domestic routes post-pandemic, but Delta remained interested in an international presence. Goodtree says that he, Rep. Jake Auchincloss, Daniel Kraft, stakeholders from CyberArk, MassPort and others made the case for Tel Aviv, too, pointing to the immense popularity of the route first launched by El Al.

“This is not like an international route. It behaves like a domestic route because of all these ties with Boston. It’s daily business travel, not just vacation travel,” Goodtree says.

“A nonstop flight to Israel is more than a convenience, it is a reflection of a deep and unbreakable connection between our community and Israel,” says Rabbi Marc Baker, president and CEO of CJP. “I’m so grateful to all of the people who worked so hard to make these nonstop flights happen and I look forward to traveling on them soon.”

Whether you’re booking for business or pleasure, reservations are open now.

Kara Baskin
Kara Baskin is the parenting writer for JewishBoston.com. She is also a regular contributor to The Boston Globe and a contributing editor at Boston Magazine. She has worked for New York Magazine and The New Republic, and helped to launch the now-defunct Jewish Rock and Roll Hall of Fame. Email her at kara@jewishboston.com.
Edit
Great Jewish Books Summer Program

5/17/2022 Edit
The Mass Shooting in Buffalo: How to Talk With Young People
By Anti-Defamation League
View All
© 2022 Combined Jewish Philanthropies of Greater Boston. All rights reserved.
Concept, design & development by
RGB Media
Powered by
Salamandra