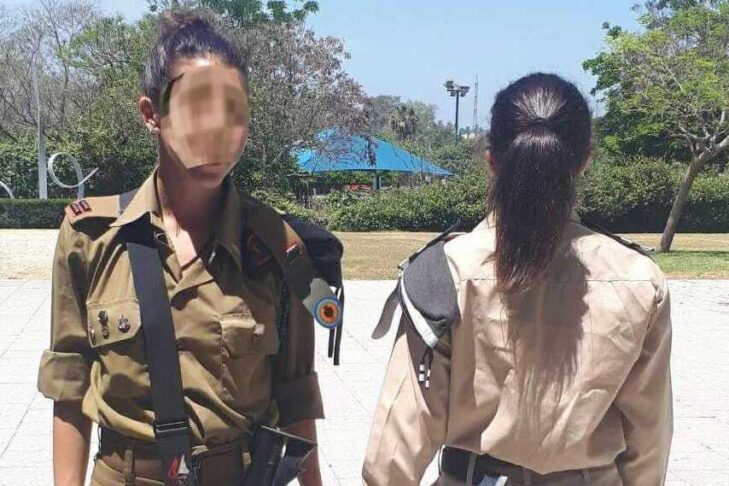 Two of Naomi and Boaz’s daughters in Israel, their identities obscured for security (Courtesy photo)

Boaz and Naomi were brought up in Israel, but their four daughters were mainly raised in the United States, both in Brookline and in Needham. But they’re hardly typical teens: The two oldest kids graduated from high school early to become Lone Soldiers in the Israel Defense Forces (IDF), which means they have no immediate family in Israel.

Naomi has a professional connection to the soldiers, too, as a Friends of the Israel Defense Forces (FIDF) New England development associate. FIDF gives guidance and support to Lone Soldiers worldwide, having sponsored 739 flights in 2019 for Lone Soldiers to visit their loved ones abroad. Currently, about 3,500 Lone Soldiers from over 70 countries around the world are serving in the IDF, just like her daughters.

One child is a head of special forces in the Israeli Navy SEALs, where she coordinates and helps to execute operations for a highly classified unit of the IDF. Another daughter is expected to graduate from the three-year Israeli Air Force flight course as one of the first female Lone Soldiers in the flight academy.

The family, speaking on the condition of partial anonymity to protect their security, shared their experiences and hopes for their two younger kids.

Tell us about your family.

Naomi: The difference between our oldest and youngest is six years, so they’re all between 17 and 22. At some point, they were all with us in the United States, but as you know, the two older ones left to make aliyah and join the service. And we made lots of moves, so this is, I think, something like our 16th home. We’ve been in the United States for 10 years. We’ve been to the UK and we’ve been to Israel; we moved from the South, to the East, to the North. Boaz was in the hotel business, so it made us transition a lot, originally.

The rest is history, but we are here now. I think, for every Israeli, and for every Jewish Israeli, their home is where the heart is. It somewhat came naturally, mainly to the older girls who spent a good 10 and 12 years in Israel, to still feel connected and to want to go back and contribute to the nation.

People might not be familiar with what a Lone Soldier is and what goes into becoming one. How did they do this?

Boaz and Naomi: It’s interesting, because when they came to the U.S., they were young teenagers. They came with zero English. It was definitely an adventure, but also a huge challenge. But they immediately saw how it opened up incredible opportunities for them. Over the years, they tried to assimilate with their friends here. “A” kind of insisted speaking English only and tried not to attend any Jewish holiday ceremonies. Initially, she refused to go home to visit family. It was the summer of 2014. And back then, there was Operation Protective Edge. Unfortunately, we were part of it. And I think she was astonished and shocked to see how the Israeli community, even though not everybody knows everyone, all got together. And she also witnessed, maybe it was on TV, the funeral of Max Steinberg, who was a Lone Soldier back then. He was killed in Gaza. It really touched her. She said to herself, “If that’s how strange people come together and become a family….” And she decided to take upon herself the honor of protecting her people, in her words.

Literally, a year later, in the summer of 2015, she made aliyah. It was really, really challenging because she was a junior at Brookline High School, and in order for her to graduate, she had to push all her credits in three years. And she worked really hard for that because she was so enthusiastic about enlisting. So she made it happen and graduated early.

Tell us about your other daughter’s experience.

Boaz: Our other daughter, “O,” is now a cadet in the Israeli Air Force Flight Academy. She’s second-generation police for the Air Force; I was myself a fighter pilot in the Israeli Air Force. And, throughout my service, we always went through my days. They were exposed to airplanes and surveys and operations. Not that she grew up saying, “I want to be a pilot,” but when the time came, she’s very competitive, and she said, “I want to be among the best of the best.” And she, like her older sister, pushed hard to finish, to graduate Brookline High School a year earlier, by the end of junior year, as well.

After a short gap year in which she traveled to Central America by herself while she was still only 17, backpacking, she went to Israel, went through all the exams, all the tests and made it to the course. Just for reference, they started the course with about 500 cadets, and there are now 41 about to graduate after three years. There are only two women among 39 men, so that’s a very selective course, and very tough. 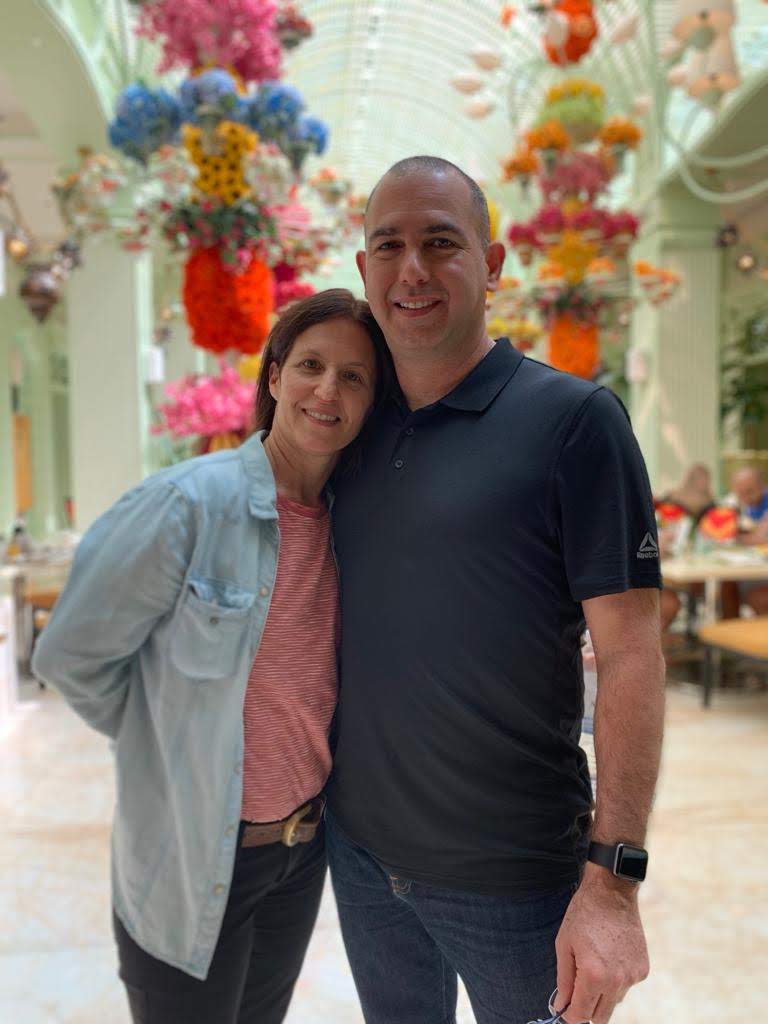 That takes a lot for a young person—a lot of bravery and a lot of courage. What do you think motivated them to be able to have this kind of courage and independence?

Naomi: Yeah, it’s a very good question, and we don’t have a definitive answer. Many parents ask us, “How did you manage to do that?” And, in all honesty, it’s not that we told them what to do. We try to lay the options and let them decide what’s best for them. I think there’s something in the air in our house because we both, as parents, were officers in the army, and we’re very involved in our community. We strive to volunteer and do as much as we can. And one of our slogans is, “Not only do well, but do good.”

I think they see that in the middle of difficulty lies opportunity. So they don’t necessarily see the hardships of their past but how they grow and how it empowers them. Each time they are challenged, they say, “Mom, I enjoy it so much. It really makes me feel stronger, and now I can do many more things than I thought I could do.” So, even the trip to Central America, as much as I was so concerned about it, I tried to keep the concerns to myself and let her fly and let them feel they can do whatever they want. There will be mistakes. There will be failures, but that’s how they grow.

Naomi: As much as it’s hard to be so far away, and we rarely speak, like a real talk, the fact that I know they’re happy and they’ve fulfilled their wishes and their dreams, that’s the most important thing. I would never want them to be near us but unhappy.

Boaz: There are many organizations today to assist Lone Soldiers, especially those who are coming from overseas to Israel, like the Friends of the IDF. The entire Israel Defense Forces today is much more aware of the special needs of Lone Soldiers and how to treat them better. They are much more considerate of their needs; they are flexible. They get to fly home once in a service, and it’s paid for by those organizations [such as FIDF]. So, overall, as parents, we feel they are in very good hands and very considerate hands.

What about COVID-19? How has the pandemic affected your family?

Naomi: Our second daughter is now in the United States because the Israeli Air Force sent her to Las Vegas to train on flight simulators for two weeks. The last time I saw her was in the last training, which was a year and a half ago, which is way too long. COVID-19 contributed because they were not allowed to leave the country. And, really, that’s because the IDF takes care of them and doesn’t want them to be exposed. We try to talk as much as we can. It’s very, very helpful nowadays that there’s FaceTime and WhatsApp, things we did not have in the past.

But, yes, as my husband said, those programs really support those Lone Soldiers. There are 70 countries from which all those soldiers go to Israel, and in the IDF by itself, there are 3,500 of them. So, there’s much more awareness, but still they need help. They don’t have their close family or immediate family in Israel, and our slogan is that “we hope that Lone Soldiers never feel really alone.” And we need to do whatever we can to help them.

What would you like other parents to know about Lone Soldiers? Any advice?

Boaz and Naomi: Know that there are programs where you can address your needs or your concerns; you don’t need to invent the wheel or really struggle. And one of the most important things to say to those families and to the Lone Soldiers themselves is to really speak up. It’s a really hard recommendation, because most of them don’t want to stand out in the group and ask for special requests. But I would encourage them to speak up and say what they need, though I know from our own daughters, it’s really, really hard to ask, especially if you’re an independent person.

Will your other daughters become Lone Soldiers, too?

Naomi and Boaz: Our third daughter was actually supposed to enlist in the IDF. Last December, she auditioned for the IDF ensemble, and, happily, she was accepted, but then she also auditioned here in the United States for colleges that do acting programs and musical programs, and she decided to go down that path. Our fourth daughter is also doing an early graduation, so she’s working very hard right now with online learning and did some courses throughout the summer in order to be able to finish all her credits. She might join the IDF, and we really try hard not to push and not to say, “You need to do what your sisters did.”

Will you go back to Israel at some point?

Naomi and Boaz: It’s still hard to say. It’s easier just to go day by day. Tens of thousands of Israelis who live in the States are torn. They love it here, but they’re torn between being here and being in Israel, having older parents in Israel.

What makes you most proud of your daughters?

Boaz: They do what they want to do; there’s no one-size-fits-all here. We encourage them to be independent and to fulfill their dreams and their wishes, not to be intimidated by difficulties or challenges, and it looks as if all four of them are taking this path. Sometimes we look at them and say, “Oh my God, how far have they gone?” It’s way beyond what we could even imagine, and that’s something I’m very much proud of.

Naomi: They are the best version of myself. Even though they aim so high, what I like about them is that they always remember to seek to help others and be human and not forget that we are part of a community. I think that’s just great.

You must miss them.

Noami: Right. But in a good way. 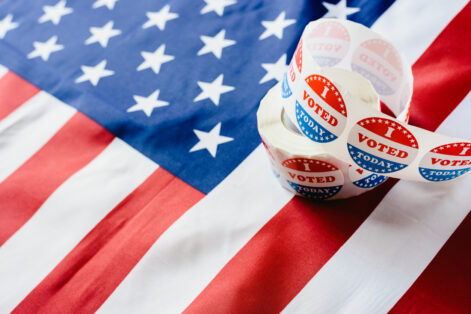