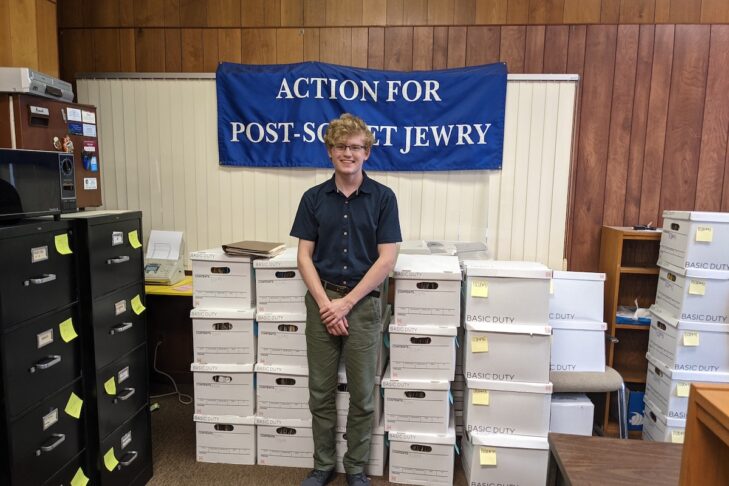 Ari Zeren, 16, is going into his junior year at Newton South High School. This summer, instead of lounging at the beach, he undertook a massive task: As an intern at Waltham’s Action for Post-Soviet Jewry, an organization dedicated to rebuilding Jewish communities in Eastern Europe, he sorted roughly 3,000 archival files, logged them and prepared them for digitizing and preservation to donate to the Wyner Family Jewish Heritage Center. The internship was arranged by Teen Just-Us, a new Jewish social justice internship program.

How did you find out about this internship, and why did you take it?

I found out about it through Temple Israel. There was a newsletter in February and my mom said to me, “You should do this.” I looked at it and it seemed like a really good program. There were three essays you had to write, which was my first experience doing that! There was an interview, which was also quite stressful, because it was my first interview. Funny story about that: The message trying to set up the interview had gone to my spam folder. I didn’t see it until much later. But I found out that I was accepted, which was awesome!

You sorted a lot of files. What about this job appealed to you?

I would consider myself very socially justice motivated. My connection to Judaism has always been through various social justice activities; it’s always been within that lens. I wanted to do something in that sphere somehow with a Jewish angle. We had cohort days with a bunch of other Jewish teens. Especially with the pandemic, I really wanted to have the connection with other peers who are also interested in social justice, which is something not typical and kind of hard to find within a school setting.

For those who don’t know why this undertaking was so important: What did you actually do?

I was going through archives from the refusenik era that started in the 1970s. It’s a piece of history that has not really been popularized in terms of our narrative of what it means to be Jewish. We had a couple of speakers come in during the cohort days, and multiple ones referenced the Soviet Jewry movement, and particularly the student Soviet Jewry movement as being their onboarding into social justice. And now they’re much older and have had careers being rabbis or human rights activists or what have you. That was their onboarding point, in the late ‘70s, to social justice.

Something I definitely didn’t understand when I started doing this and grew to understand is that, especially for Jews, it was sort of the equivalent of the Sunrise Movement today. The struggle for Soviet Jewry was the focal point of youth engagement in the Jewish world. It’s 40 years old. It makes it history but it’s not been popularized as a story about anything related to the pogroms or the Holocaust, or this earlier wave of Jewish migration. And there aren’t really resources or archives or documents that have been archived that tell the story of the Soviet Jewry movement.

What did you learn?

It could be tedious sometimes. I think there was something like 126 linear feet archived. But I did find a couple of things really, really interesting. For example, I got to go through the files of all congressional correspondence. Over the years, we always had a congressional liaison. We did a lot of communication with Barney Frank, with Ed Kennedy, and also with some state representatives, and so on. I found it really, really interesting. They’d send information on refuseniks, especially to Ed Kennedy, who would then take those lists and send them to Soviet premiers to use his influence to try to get to work on cases and try to help those Jews out. There are some funny documents. At some point, Barney Frank had a heart attack and he was in the hospital. Judy Patkin, who was then our executive director, sent a get better soon letter, and he sent a humorous letter back that was delightful to read.

A letter had been apparently sent by the mayor of Newton—I forget exactly which mayor—but a group of residents had sent a letter to the mayor saying that, you know, our relatives told us there’s a cemetery in this town in the Soviet Union, a Jewish cemetery, that has been desecrated. And so the mayor of Newton sent a formal letter to the equivalent official in this town in the Soviet Union, and they apparently got people to clean up the cemetery and then sent a letter back. And so then the mayor of Newton sent both those things to Action for Post-Soviet Jewry. That was just an amazing individual story. That was inspiring in a lot of ways.

What’s the legacy of this work?

In the immediate sense, it’s the opportunity to reconnect to that past, reconnect to that history. There’s the academic potential. This is a trove of information for academics, for people interested in writing about the movement, writing about the organizations within the Soviet Jewry movement, to be able to bring that history to the public. It’s putting in another piece of the story of Judaism and Jewish immigration in the United States. I hope one of the impacts might be to call some attention to Jews still living in the former Soviet Union.

Action for Post-Soviet Jewry is going to do an event soon on the Babi Yar massacre. A lot of these massacres, especially in the Ukraine, lie relatively un-commemorated and unmarked in some cases. And I think there’s an important history of the Jewish people to be called to recognize what’s going on there. In the Ukraine, for example, there’s still very deep, systemic antisemitism within all of the structures there. Despite having a Jewish president now, it’s still very difficult. No one chooses to be identified as a Jew. I would hope that there’s some recognition on those fronts and some reconnecting to that area of the world.

What’s next for you?

I’ve got junior year of high school, which is supposedly the worst one! Hopefully I’ll be going back in person; I think that’ll be exciting. I’m looking forward to hopefully doing some election work and working on some campaigns for the Newton City Council and mayoral race. I’ll hopefully be involved in that. And the Greater Boston Interfaith Organization, which is an organization that I’m involved in on occasion, just did a listening campaign. They’re having the results of that at a big meeting next Thursday, which I’m going to go to.

I’m also involved in the Newton South Human Rights Council, which is a group of students, staff and teachers at Newton South High School who work to do anti-racist programming within the school—both reactive if there’s a racist incident, and proactive to try to diversify the curriculum and remove systemic racism within the school.

What do you want to do for work someday?

I want to be involved in politics or activism in some capacity. I probably want to run for office, at some point, at least for something, even if it’s just city councilor. Hopefully, I’d like to be a representative someday and potentially go to law school for something like public policy, but that’s a long ways away. I want to have an impact on my community and try to make the world a little bit better.

Kara Baskin
Kara Baskin is the parenting writer for JewishBoston.com. She is also a regular contributor to The Boston Globe and a contributing editor at Boston Magazine. She has worked for New York Magazine and The New Republic, and helped to launch the now-defunct Jewish Rock and Roll Hall of Fame. Email her at kara@jewishboston.com.
Edit
Sukkot Harvest Festival