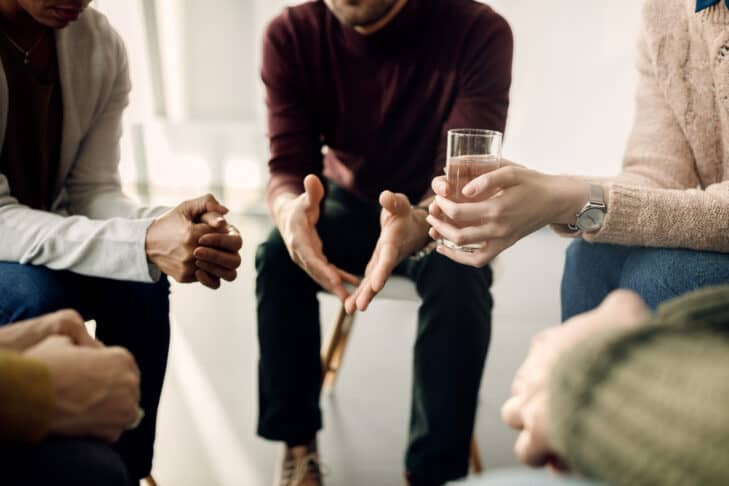 Addiction. Mental health struggles. The sheer fatigue of living. Rabbi Nechemia Schusterman, the spiritual leader of Chabad of Peabody, wants people to have a safe haven to share troubles of all sorts. So he launched Jewish Support Anonymous (JSA), uniting Jews struggling across areas—from addiction to health problems to difficult relationships. The biweekly program happens at Chabad.

The initiative is personal for Schusterman, whose adult son has dealt with substance use disorder. As Jewish Journal reported, he was inspired to launch the group thanks to a podcast, BrainStorm, with Sony Perlman.

Perlman is a New York-based social worker who specializes in addiction, who started a support group called “Mevakshim (Seekers) Anonymous” for men in the Orthodox Jewish community.

There are some 12-step elements to Schusterman’s group, but this one has a distinctly Jewish lens—it’s not set in a church basement, for example—and fills a crucial gap.

“There are so many Jewish traditions around drinking,” he says. “But there’s a stereotype that we don’t have [drinking] problems. And the bigger stereotype is that we don’t do 12-step recovery.”

He also underscores that everyone who struggles with anything, not just substance abuse, is welcome to join.

“There’s something magical about the 12 steps—a structured system of internal reflection and recognizing that this higher power is running things. It’s such a helpful thing.”

Schusterman emphasizes that the Jewish value of compassion is key as opposed to tough love when interacting with a loved one’s substance abuse or any life-limiting issue.

“As a Jew, the notion of getting out at the first signs of crisis is just not the Jewish way. The Jewish way is: We find the compassion within the situation. We can love the person without loving their decisions, and we can give boundaries without completely cutting person off,” he says. “The recovery safety net is very much a Jewish idea—we take care of our people.”

He recommends “God of Our Understanding” by Rabbi Shais Taub, which refers to addiction as a “spiritual illness.”

In this case, an addiction—whether it’s gambling, alcohol or drugs— becomes the solution. But the problem is, “this is diminishing returns…The trick is to fill that hole with something spiritual,” whatever that might be, he says, underscoring again that anyone who struggles with any issue, far beyond addiction, is welcome.

“I almost called this ‘Strugglers Anonymous,’ but it had a dark ring to it,” he says.

The feedback has been incredibly positive.

“People have told me, ‘It’s so nice to finally have a Jewish option for this kind of support,’” he says. “A dream of mine is to see this duplicated everywhere, to break the stigma and to try to bring more awareness and healing to the world. We’re all strugglers. No one walks this earth unscathed.”

Learn more about the biweekly meetings and how to attend here.

Kara Baskin
Kara Baskin is the parenting writer for JewishBoston.com. She is also a regular contributor to The Boston Globe and a contributing editor at Boston Magazine. She has worked for New York Magazine and The New Republic, and helped to launch the now-defunct Jewish Rock and Roll Hall of Fame. Email her at kara@jewishboston.com.
Edit
Tzelem Boston for LGBTQ+ Teens

Edit
Enough Is Enough: A Community Conversation on Antisemitism

Edit
What Does It Mean To Belong in a Jewish Community?