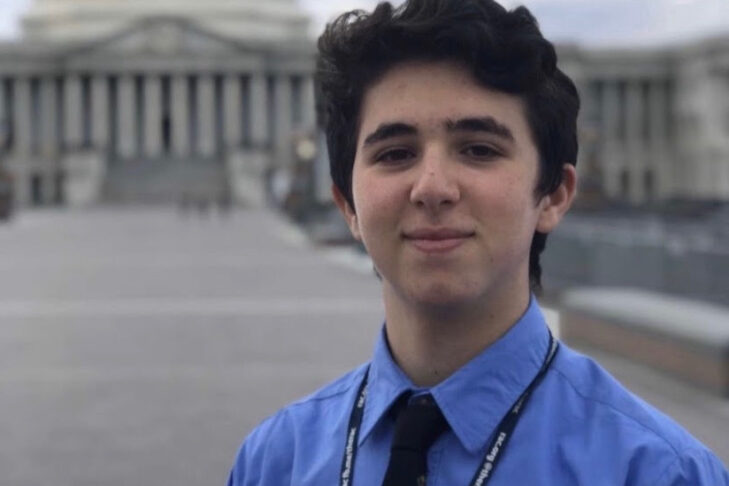 Over the next few weeks, I’m spotlighting Jewish teen climate activists throughout the Boston area. First up is Lexington High School senior Joel Swirnoff, who’s the co-director of policy within the national Jewish Youth Climate Movement (JYCM). JYCM is a subdivision of Hazon, a Jewish nonprofit educational organization devoted to environmental activism, with a large youth contingent. Swirnoff got involved in the group through Lexington’s Temple Isaiah, where he runs the local JYCM chapter. Next year, he’s off to Washington University in St. Louis.

What’s your role in climate activism in Boston?

I’m very grateful to get the word out about Hazon, as well as the Jewish Youth Climate Movement, which is where I come into play. The Jewish Youth Climate Movement is a subsection of Hazon, and it’s all team-led. Our oldest member is a graduate student. All of us are millennials or Gen Z. I’m the co-director of policy within the JYCM. We’re a young organization, so a lot of what we want to get done in terms of legislation is not quite within our purview yet. A lot of what we do is help make educational resources about certain policies that temples or other chapters can use. For example, we recently made a presentation about the intersection between antisemitism and the climate crisis, and then we went to a youth summit.

That’s really interesting: What’s the connection between antisemitism and the climate crisis?

What the presentation teaches is that a lot of the actors in terms of propagating climate change in the first place within the Industrial Revolution, and pushing antisemitic myths that have worked their way into our system of government and our economic system, are really the same people. One great example is Henry Ford. He is obviously very important for his creation of the Model T and ensuring that cars were widely accessible, but he was also a notorious antisemite. He wrote many books and had a lot of sway in terms of politics. Another example is Standard Oil, which is now seen through Chevron, ExxonMobil and BP—companies that came out of Standard Oil and helped fuel Nazi planes during World War II and the Holocaust. A lot of these actors are the same. That’s one of the big connections we tried to touch on in terms of how antisemitism and the climate crisis have come from the same route.

Tell me a little bit about yourself and your own climate backstory.

I’m 18. I am about to graduate high school. What spurred my climate involvement was my involvement at Temple Isaiah. There’s a member of our temple who is very involved with general climate change. Our youth group leader reached out to JYCM, and then we became the first chapter. Because the organization is still growing, they were looking for members for their leadership board. And I thought, “Well, I’m terrified of climate change, and it feels like I’m being complicit, regardless of how much I can actually change.” It’s very contradictory to what I’ve been taught as a Jew, in terms of the idea of tikkun olam. I’m very lucky to have gotten a position as the co-director of policy. How can I just stand idly by to this ginormous crisis?

What do you think is on the minds of your classmates and peers? How big a deal is climate change to them?

One thing I’m very glad about is it seems that Gen Z, more than any other generation, cares about this issue. We know that this is going to be our future and the future of those after us. We’re borrowing this world from generations after us. A lot of us are very frustrated that older generations don’t necessarily seem to care about it as much. I was recently talking to my cantor, and one thing she was noticing is that, overwhelmingly, maybe three-fourths, if not more, of d’var Torahs are becoming about the climate crisis and what that student wants to do to help fight against the climate crisis. I think that’s pretty indicative of how we’re all feeling.

I know many students who I’ve talked to as the co-president of our temple’s youth board say that climate change is always there, cloaking their lives with anxiety. It’s something I definitely feel myself. It hits you: Our entire world is moving toward what seems like an inevitable extinction, or whatever it is; it’s laying over our lives. And because it feels like it’s such a ginormous issue, I think a lot of the anxiety is therefore exacerbated. What can we actually do? So, I would say, definitely, Gen Z cares a lot about climate change, at least from my experience.

What would you say to teenagers who are hoping to make a change? Maybe they don’t maintain your level of commitment but want to make a small difference.

I think the big thing to get through is this is a world that we are inheriting. Many of us are going to live long enough lives to see such great adverse effects of this. It’s a lot easier to talk to students in California to galvanize them for this, because they know that wildfires are a result of climate change. One thing I’d say to motivate people is: “This is going to be our world and it is our world now. And if not now, when?”

The JYCM has emphasized that climate change is not the result of carbon footprints of individuals. While composting and recycling is always a good idea, where this comes from is really the cooperation between corporations, capitalism and the United States government and the inability of the structure of government as we see it now to effectively take on the corporations. All the money flowing into our elections is coming from people who are benefiting from the climate crisis. They’re the CEOs of BP and ExxonMobil. This is bigger than us as individuals, and therefore we have to attack it as a group. So, something not propagated by just one person can therefore not be tackled by just one person. We have to get together to take something down.

Why is Boston an epicenter of this movement?

I think Boston is one of the more liberal cities within the United States. And that makes it a bit easier from the outset to get people caring about this. I think one thing we’re also seeing is that Boston is in danger. We are on the water, and when the water rises, it’s going to take down neighborhoods like Back Bay. Boston also has a culture of scientific discovery and curiosity. And one thing that often turns people away from caring about the climate crisis is not quite understanding that it is inevitable.

What part of climate change worries you the most?

The effect on people’s lives. Right now, we’re seeing people already becoming refugees as a result of the climate crisis and people losing their homes. People’s whole lives are being turned upside down. I think that’s something that is only going to become worse in the future. That’s really the crux of it. People are going to die. People are going to get hurt from this.

Kara Baskin
Kara Baskin is the parenting writer for JewishBoston.com. She is also a regular contributor to The Boston Globe and a contributing editor at Boston Magazine. She has worked for New York Magazine and The New Republic, and helped to launch the now-defunct Jewish Rock and Roll Hall of Fame. Email her at kara@jewishboston.com.
Edit
CJP Teen Engagement Network End-of-Year Celebration