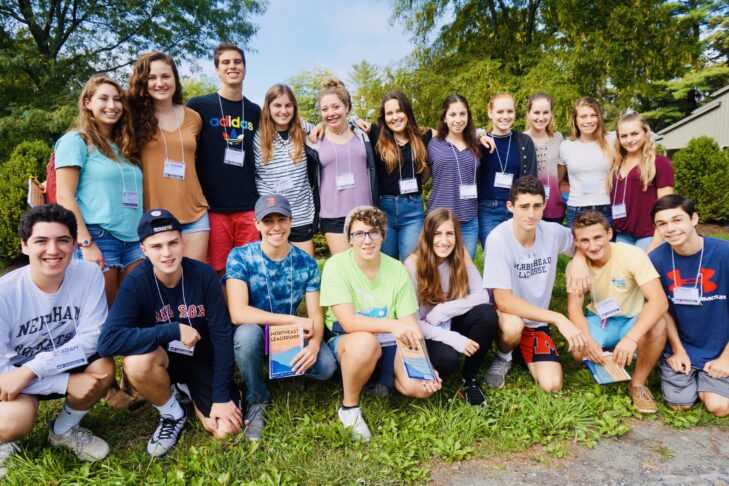 The 2017-18 Jewish Teen Initiative Peer Leadership Fellows form a diverse group of leaders, representing communities, synagogues, camps and organizations throughout the Greater Boston area. They each have unique Jewish journeys with varied backgrounds and will be working to help create a more connected and inclusive community for their peers. Meet the Fellows and learn more about their stories below! 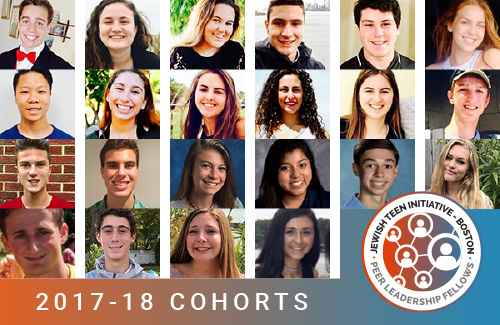 Dar Bejerano is a rising senior at Natick High School. She is involved in the Natick Ski Team and Change the World Club and enjoys waterskiing, downhill skiing and babysitting. She is a member of Shevet Ofek (Israeli Scouts in the Boston area), where she counsels the freshmen. Dar loves spending time with her friends and family and can stay up all night talking with them about things she loves—especially if they’re munching on some good Israeli snacks together.

Abby Blumenfeld is a rising senior at Wayland High School. She is involved in volleyball, basketball and tennis and enjoys playing and learning new instruments. She is a member of Temple Shir Tikva in Wayland, spends her summers at Camp Pembroke and enjoys meeting new people.

William Cummins is a rising senior at Keefe Regional Technical School in Framingham, where he plays football, wrestles and runs track. He belongs to Temple Beth Torah in Holliston and is an active member of BBYO. Will has a twin sister and enjoys spending time with friends.

Jon Dees is a rising sophomore at Wellesley High School, where he runs on the track team and enjoys hanging out with my friends. Jon spends his summers at Camp Tel Noar and is a member of Temple Shir Tikva in Wayland.

Noah Green is a rising junior at Lincoln-Sudbury High School. He stage-manages school productions and is an editor for the school newspaper. He is a member of Congregation Or Atid in Wayland and his favorite flavor of pie is blueberry.

Hailey Joseph is a rising junior at Natick High School. She is involved with ADL and key club (community service) at school. She is a member of Temple Beth Elohim in Wellesley and goes to Camp North Star over the summer. She enjoys playing volleyball and dancing.

Julia Joseph is a rising senior at Natick High School. She is a competitive dancer, plays softball and is also involved with ADL and SADD at school. She belongs to Temple Beth Elohim in Wellesley, where she is an active member of its teen community and NFTY. Julia loves to play sports, travel and go to overnight camp.

Matt Kreidberg is a rising junior at Lincoln Sudbury Regional High School, where he is involved in the MVP (Mentors in Violence Prevention) club focusing on ending domestic violence against women. Matt is on the varsity lacrosse and football teams, loves to bike and snowboard and plays guitar in his free time. He is a member of Congregation Or Atid in Wayland and spent three summers at Camp Bauercrest. Matt has finished the MS bike ride from UMass to Provincetown to raise money for MS three times and plans on doing it again this summer. Matt’s passion is for people and he prides himself on being able to create connections and cultivate relationships in every aspect of his life.

Hannah Levine is a rising senior at Framingham High School, where she serves as the vice president of her class. She enjoys being with her friends and attending NFTY events. She is a member of Temple Beth Am in Framingham, where she serves as the co-president for her youth group, BATY. She loves to be in nature while hanging out with her twin brother.

Sophie Meltzer is a rising senior at Framingham High School. She enjoys reading and spending time with her friends. For the past six years, Sophie has spent her summers at Camp Tel Noar in Hampstead, New Hampshire, and is looking forward to being a counselor this summer. Last fall, Sophie studied at the Alexander Muss High School in Israel as an Impact Fellow. She is so excited to be joining the Peer Leadership Fellows in Metrowest.

Benjamin Silver is a rising junior at Framingham High School. He is a three-season runner (cross-country, indoor track, outdoor track) and also loves playing and watching baseball, football and basketball. Benjamin enjoys spending time with his friends and family. He is a member of Congregation Beth El in Sudbury, where he spends time with his temple youth group, WASTY.

Sarah Winn is a rising senior at Gann Academy in Waltham. She is an active leader in USY at Temple Israel in Natick and just completed a year on the board of The Jewish Teen Foundation of Greater Boston (JTFGB), a group of high school students learning the responsibility of collective philanthropy through tikkun olam and tzedakah. Sarah is a tri-season varsity athlete at her school on its soccer, basketball and softball teams. She is also deeply involved in Gann’s high school theater program, where she stage-manages, produces and performs in shows. Sarah spent this past summer on the Dor L’Dor Cohen Camp program to Israel after seven amazing summers at Camp Pembroke and is so excited to be a counselor there this summer.

Jonah Bornstein serves as the vice president of the Best Buddies Club and enjoys listening to music, hanging out with friends and playing baseball. He attends Temple Emanuel and has been going to Camp Tevya for many years. Fun fact: Jonah is a certified lifeguard.

Michael Kobrosky is involved with his school’s Newspaper Club, Jewish Student Union, Model UN, History Club and Investment Club. He enjoys writing and playing lacrosse. Michael is a member of Temple Ahavat Achim in Gloucester and enjoys hanging out with his friends.

Haley Lakind is a captain of the cross-country team, participates in indoor and outdoor track, is a co-president of the Innovators Club and participates in the International Relations Club. She also enjoys creative writing and spending time with her friends and family. She is a member of Temple Emanu-el in Marblehead and attends many Jew Crew events held at Chabad in Swampscott. Haley is very excited to work with JTI this year.

Lily McGuirk is involved with Rachel’s Challenge, an organization that promotes kindness and respect to eradicate bullying and violence. She enjoys running and spending time with friends and family. Lily is a member of Temple Emanuel.

Max Mogolesko’s extracurricular activities include Best Buddies and the Leadership Club. As a freshman, he enjoyed playing on the freshman basketball team and running the 100 meter on the JV track team. Max has been attending Camp Tel Noar since 2012 and was selected to be a color war captain this summer. Next year he plans to go to Israel with the Dor L’Dor program and learn about his Jewish homeland. During the year Max attends Congregation Shirat Hayam in Swampscott.

Simone Nardizzi runs year-round cross-country and track and enjoys traveling and working out. Simone is a member of Temple Emanu-El in Marblehead and she’s so excited to do this fellowship.

Darian Wulf is involved in cross-country and lacrosse. He enjoys running and building/constructing things. Darian is a member of Congregation Shirat Hayam in Swampscott. He has gone to Camp Tevya for six years and will be going to Israel with camp next summer. Darian is obsessed with ice cream.

Adam Zamansky plays basketball, football and lacrosse and loves to play piano and guitar. He is a member of Emanuel Temple and goes to Camp Bauercrest every summer. In his free time Adam enjoys listening to music and writing his own music.

Hannah Zimmerman has been dancing at Dance Etc. for 16 years and loves every second of it. She is a member of Temple Ner Tamid in Peabody and attends temple on a regular basis. She has also attended Camp Pembroke for the past 11 summers and looks forward to going back summer after summer because it is her summer home. She can’t wait to help get other Jewish teens involved.

Lexi Zunick is involved with the Interact Club, Student Council and tutoring for the elementary school. She is on the varsity cheerleading team and has been cheering since she was 7. Lexi belongs to Congregation Shirat Hayam and has spent the last eight summers at Camp Tel Noar. In her free time Lexi enjoys spending time with friends and camp friends, babysitting and coaching Marblehead Youth Cheerleading. She has enjoyed JTI (back when it was NSTI) as a volunteer for L’Shaper and J-Serve and is looking forward to being a peer leader.