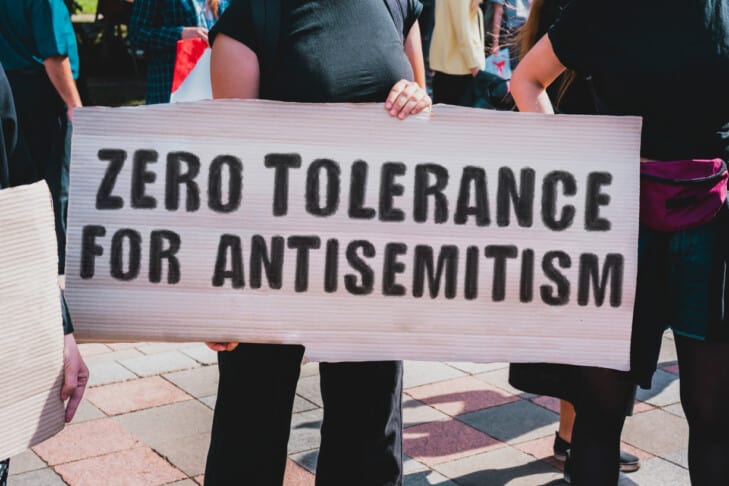 Returning to its first in-person event since 2019, the Anti-Defamation League’s “The Good Fight: A Forum on Confronting Antisemitism” will take place in Boston on Sunday, Oct. 30, with a hybrid component and an overall focus on antisemitism and anti-Zionism on college campuses.

“One of the top topics we hear about from every person within our community is college campuses,” said Robert Trestan, director of ADL New England and vice president of the ADL Western Division. “We made a conscious decision to really focus on this in the opening plenary session.”

In the keynote, Trestan will moderate a conversation with Harvard College president Lawrence Bacow and Wellesley College president Paula Johnson. U.S. Rep. Katherine Clark (D-MA), the assistant Democratic leader in the House of Representatives, will give remarks to open the day.

“We are seeing antisemitism and Jewish life on campus impacted in real time all over the country,” Trestan said, “so we are fortunate to have two top college presidents coming to engage in a conversation about this.”

Harvard and Wellesley have each experienced campus controversies relating to the Israeli-Palestinian conflict. Student newspapers on both campuses—the Harvard Crimson and the Wellesley News—each endorsed the Boycott, Divestment and Sanctions (BDS) movement, the Crimson this past spring and the News this month. The News also initially supported the Mapping Project, an anonymous website that launched this summer and accused Massachusetts institutions of being “responsible for the colonization of Palestine,” as well as “other harms,” from U.S. imperialism to gentrification-based displacement. The News ultimately withdrew its support for the Mapping Project. Both the Crimson and the News editorials condemned antisemitism. This past spring, an “apartheid wall” also went up in Harvard Yard, bearing the message: “Zionism is Racism / Settler Colonialism White Supremacy Apartheid.”

“I think the Zionists and supporters of Israel on campus are under attack in many ways,” Trestan said. “And for almost the past decade, we’ve seen sort of an uptick in resolutions and efforts to get college campuses to divest, efforts by students to get the administrators who run the institution to take action. For the most part, it’s failed.”

He added, “I think the trend we’re seeing right now is students and student groups taking matters into their own hands, with examples being the editorials in the Harvard Crimson and Wellesley News.”

Trestan also cited developments at other universities, including Tufts University. In an op-ed in the Tufts Observer this past spring, the Tufts chapter of Students for Justice in Palestine (SJP) accused Israel of human rights violations going back to the founding of the Jewish state in 1948. Tufts SJP asked students to sign a pledge that included refusing involvement with either “advocacy groups that normalize Israel,” or “programs that fund trips to Israel,” as well as boycotting two companies that do business with Israel and sell products at Tufts—Sabra and Pillsbury—and committing “to BDS until Palestine is free.”

Trestan also expressed concern over the recent decision of multiple student groups at Berkeley Law School not to invite any speakers with Zionist views. “It creates a litmus test,” he said. “The use of ‘Zionist,’ for too many people, is a substitute for the word ‘Jew.’”

At Tufts, the advocacy groups named in the SJP op-ed included a relatively liberal organization —the university chapter of J Street.

In addition to the plenary session with the two college presidents, “The Good Fight,” cosponsored by CJP and the Ruderman Family Foundation, will feature four workshops: “Jewish Students on Campus Speak: The Real Story” (in partnership with Hillel), “Religious Rights in the Wake of Recent Supreme Court Decisions,” “Spotting Problematic Ideas and Simple Tips for More Productive Engagement on Israel” and “Keeping Jewish Spaces Sacred, Safe and Welcoming” (with Tamara Fish of Khazbar, Greg Ehrie of ADL and Jeremy Yamin of CJP). Marc Baker, president and CEO of CJP, will also speak.

An updated toolkit for fighting antisemitism will be presented at the forum. The initial version debuted at the previous in-person forum, in 2019, which featured appearances from Emory University professor Deborah Lipstadt—now the U.S. special envoy for monitoring and combating antisemitism—and former New York Times columnist Bari Weiss.

Trestan promised this edition of the forum will be worth the three-year wait to get back to in-person. “If you have a child on campus, or in any way have a connection to someone who is Jewish and is going to be on a college campus, this issue impacts you.”

Register today and be part of the good fight

Rich Tenorio
Rich Tenorio covers antisemitism news for JewishBoston.com. His work has appeared in international, national, regional and local media outlets. He is a graduate of Harvard College and the Columbia University Graduate School of Journalism. He is also a cartoonist. Email him at rich@jewishboston.com.
Edit
Coffee & Conversation: Setting Program Goals